What's the problem with the world

Hunger: The problem that can hardly be solved

When asked if she would like to live in the country, Sira Traore smiles and nods. Country life is very good, she says, but adds: "If only it would rain again at last. If the rain doesn't stop, it will be really difficult." For three years it had not rained properly in their village of Same Plantation, which is located in the Malian part of the Sahel zone. Sometimes a shower came, sometimes a storm - but never enough to be able to cultivate rain-fed crops properly.

The lack of rain and the upcoming drought are becoming a problem for many people, especially in the global south. If there is no harvest, the supply of an entire family or an entire village may be at stake. 821 million people worldwide were malnourished in 2017, according to a report by the United Nations Food and Agriculture Organization (FAO). In the past year, almost one in nine people went hungry. "It is a very alarming situation," says Cindy Holleman of FAO. "Hunger continues to rise, especially in Africa. But we also see that in South America. And in Asia the numbers are still high. " 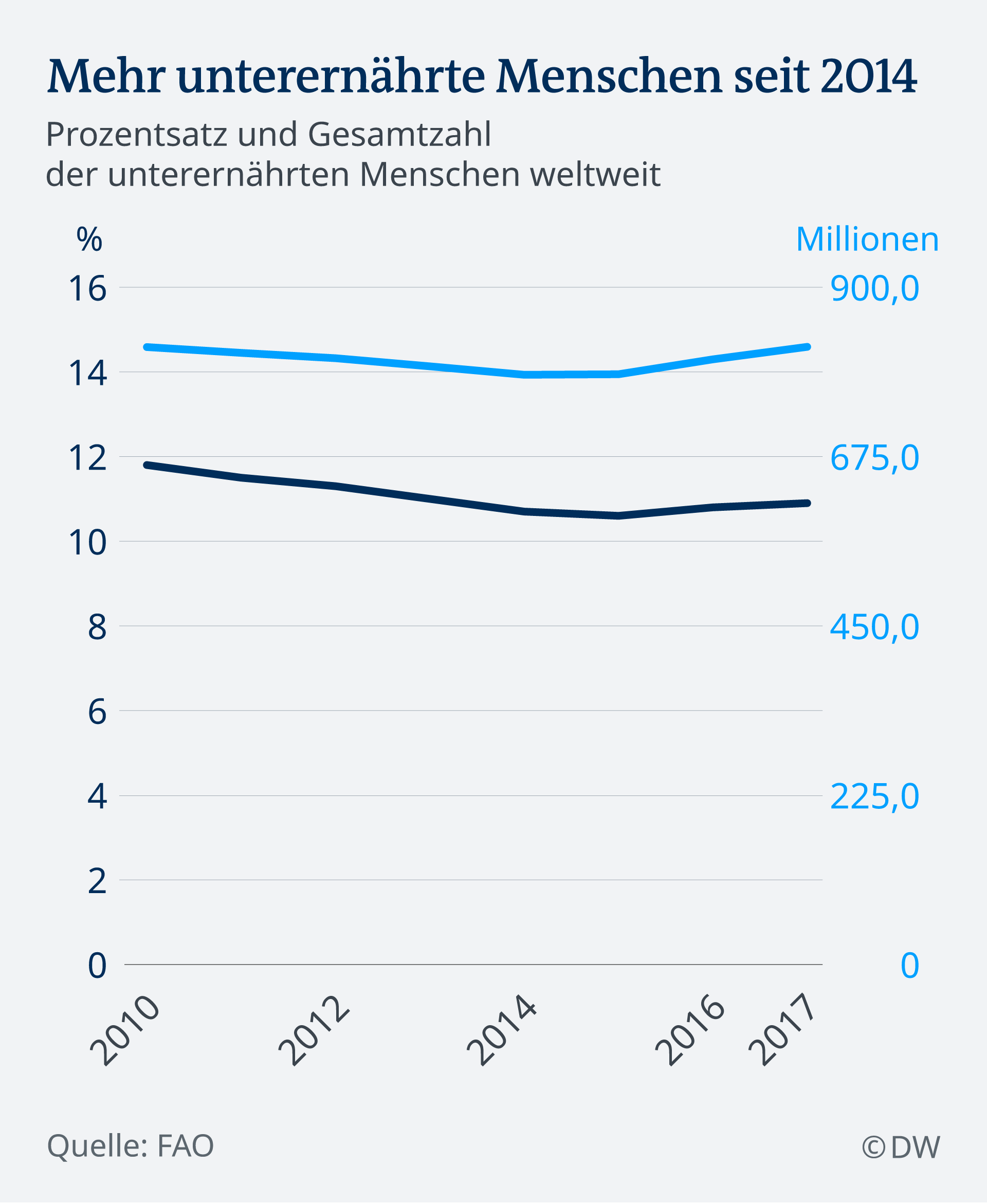 For many years, hunger in the world decreased. The trend has been turning for three years

At the moment, Sira Traore can only hope that it will rain a little in the coming weeks and that the ground will become softer again. Many Africans share this hope with the woman from Mali. According to the FAO report, one in five people on the continent was malnourished in 2017. Nowhere else is this value so high. Asia ranks second with 11.4 percent - slightly above the global average of 10.9 percent. In North America and Europe, however, less than 2.5 percent of the population is malnourished.

"The big news is not good news," said FAO Director José Graziana da Silva when the report was presented in Rome. For the third time in a row, da Silva had to announce an increase in the number of malnourished people. It's a worrying development: in 2014 the number reached its lowest level of 784 million people. Now, three years later, the number is back to 2010 levels.

"The influence of climate change is so strong that the positive trend is undone," da Silva had to admit. A second factor is increasing unresolved conflicts around the world that are limiting food production. The two together make it a lot more difficult for the United Nations to reach its 2030 target. At the historic climate summit in Paris in 2015, the governments agreed to defeat hunger in the world by 2030. Back then, hunger was seen as the world's greatest solvable problem. The new figures paint a different picture of the situation. 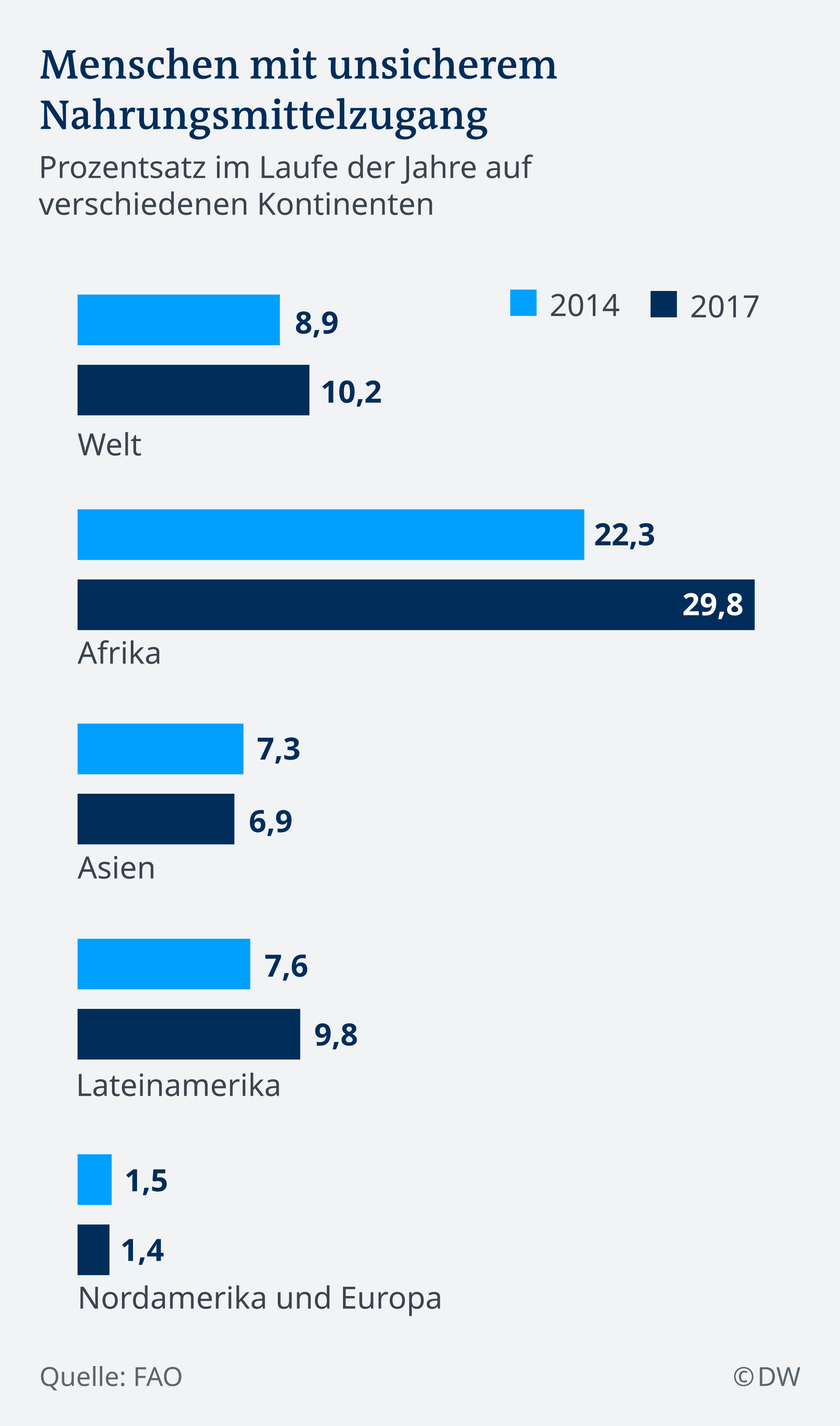 "We take the 2030 target as our mission," says Jan Sebastian Friedrich-Rust. He is the managing director of the organization "Action against Hunger", which works with the UN, among others. "Still, the goal is very difficult to achieve," he admits. "It is possible that the UN will have to revise this target again."

Children in particular have to struggle with the consequences of malnutrition. The FAO report shows that in 2017 every fifth child under the age of five was malnourished. The UN wants to reduce this value by ten percent by 2030. 7.5 percent of children under the age of five were underweight in the past year. This number is to be halved by 2030.

Not an easy plan as the problem of malnutrition is directly related to climate change. There are many malnourished people, especially in countries that are heavily dependent on agriculture. This is also shown by the new FAO report. "Climate change leads to droughts that result in lower yields," explains Friedrich-Rust. Unlike in the western world, there are also no reliable irrigation systems in many regions in Africa and Asia.

Climate change affects small farmers and families in particular. "They often have to live from hand to mouth," explains Friedrich-Rust. That is why "Aktion gegen die Hunger" supports local people with seeds or even builds wells.

The organization is also active in conflict areas. The Central African Republic is at the top of the world hunger index. This is where malnutrition, underdevelopment and child mortality from lack of food are greatest. Since the fall of President Bozizés in 2013, various militias have been fighting each other and destabilizing the country.

"The infrastructure has been destroyed, houses burned down, fields lie fallow, there are no more seeds, the income is less than one euro a day," says Friedrich-Rust, describing the local situation. It is the most dangerous country for humanitarian aid. Nevertheless, "Aktion gegen die Hunger" is on site, but is not allowed to enter all regions of the country. "The help that can be provided is therefore often just a drop in the ocean". 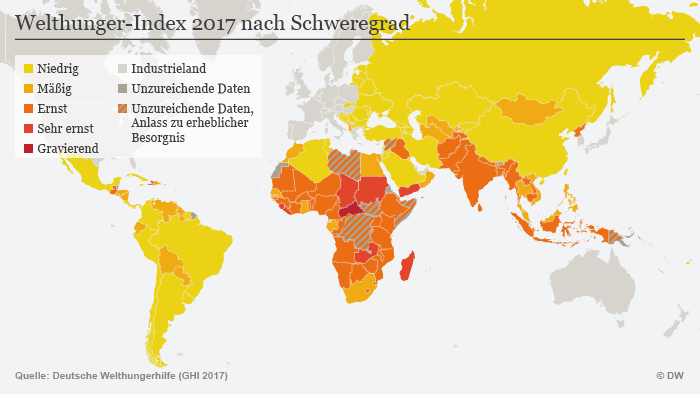 The Central African Republic has the highest index for malnutrition

The West must do more

In order to still achieve the 2030 target, states should increase their development aid, believes Friedrich-Rust: "The German government has also increased its budget, but that is still far from what is needed." The money would also often go to governments accused of corruption. Investments to combat malnutrition are rare. FAO's Cindy Holleman sees another solution for local farmers: diversify. "Many countries in Africa are monocultures, which means that farmers only grow corn." And if this harvest fails, they have nothing at all.

The United Nations is not to blame for the increasing number of malnourished people, says the managing director of "Aktion gegen den Hunger": "The UN can only work with the money it gets from the states." The West must Do more to combat hunger in the south, believes Friedrich-Rust. After all, greenhouse gases and climate change are mainly the result of industrialized countries.