US President Donald Trump is still not very popular around the world. In many countries people do not have great confidence in his political abilities. This is shown by a new study by the prestigious Pew Research Center, for which people in 33 countries outside the United States were surveyed between May and October last year.

Globally, only 29 percent of respondents said they had confidence that Trump would make the right decisions in global politics. 64 percent had no confidence, 7 percent answered "I don't know". The US president scores worse on average than most of the other heads of government who were asked to rate respondents in the Pew study.

Most people in the world trust Chancellor Angela Merkel. 46 percent of those surveyed around the world said they would trust Merkel to make the right decisions in world politics. The Chancellor was followed by French President Emmanuel Macron (41 percent) and Russian President Vladimir Putin (33 percent). Only the Chinese Prime Minister Xi Jinping fared worse than Trump - only 28 percent of those surveyed said they would trust his global political decisions. However, the proportion of those who give it is explicit Not trust, less than with Trump. Only 43 percent said they were negative, 23 percent answered with "I don't know".

The image of the US president can only be represented to a limited extent with this mean - the answers varied greatly from country to country. In neighboring Mexico, from which Trump wants to distance himself with its notorious wall, trust in his global political decisions was only 8 percent. In the UK, almost a third of the people trust the US president's abilities, but things are not as good in the rest of Western Europe. For example, only 13 percent of Germans said they had confidence in Trump's global political decisions. 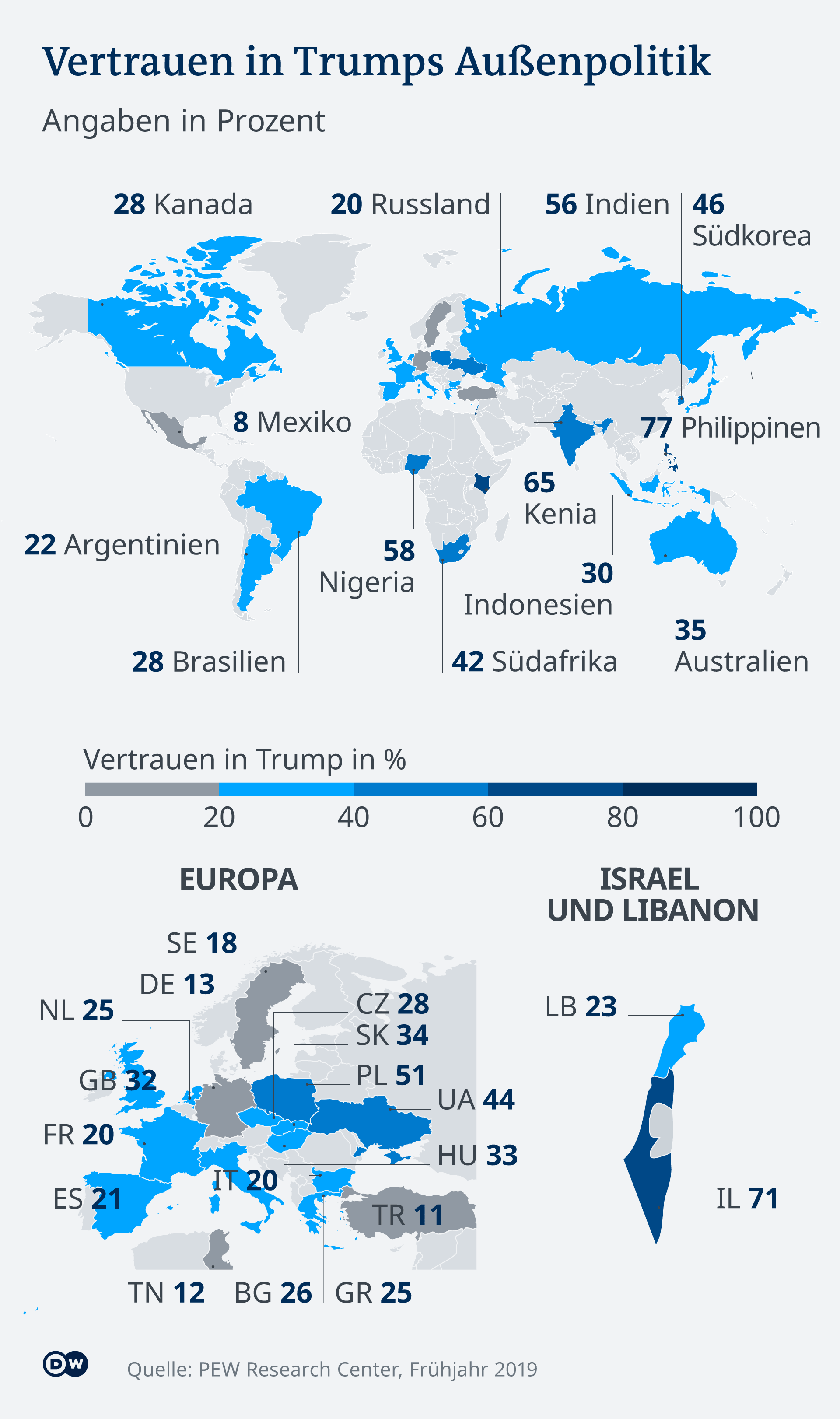 The US President has the best image in the Philippines. Almost three quarters of the people there said they had confidence in his global political decision. In Israel, with which the United States has a close relationship under Trump, 71 percent of the people trust him. In Poland it is still just over half.

The results from Ukraine and Russia are surprising. In Ukraine, 44 percent of those surveyed by the Pew Research Center said they had confidence in the global political decisions of the US president - more than twice as many as in Russia. And that despite the fact that Trump is said to have withheld almost $ 400 million in military aid for Ukraine, which was crucial for the country in the fight against Russia?

"The questioning took place before the phone call between Trump and [Ukrainian President Volodymyr, editor's note] Zelenskyi became public," Jacob Poushter, a deputy director at the Pew Research Center, told DW. "Views change over time," especially after such dramatic political events as the release of the phone call transcript that revealed Trump had put Ukraine under pressure. Even after a change of president, the numbers fluctuate greatly. After the end of Barack Obama's term in office, confidence in the US president collapsed in many Western European countries.

Against tariffs, for approaching North Korea

In the study, participants were also asked about certain political initiatives by the US president. The worst done was Trump's decision to raise tariffs on imported goods. 68 percent of respondents worldwide rejected this step. Just over half of all respondents are negative about the US government's strict immigration policy, which has reduced the number of migrants entering the country. 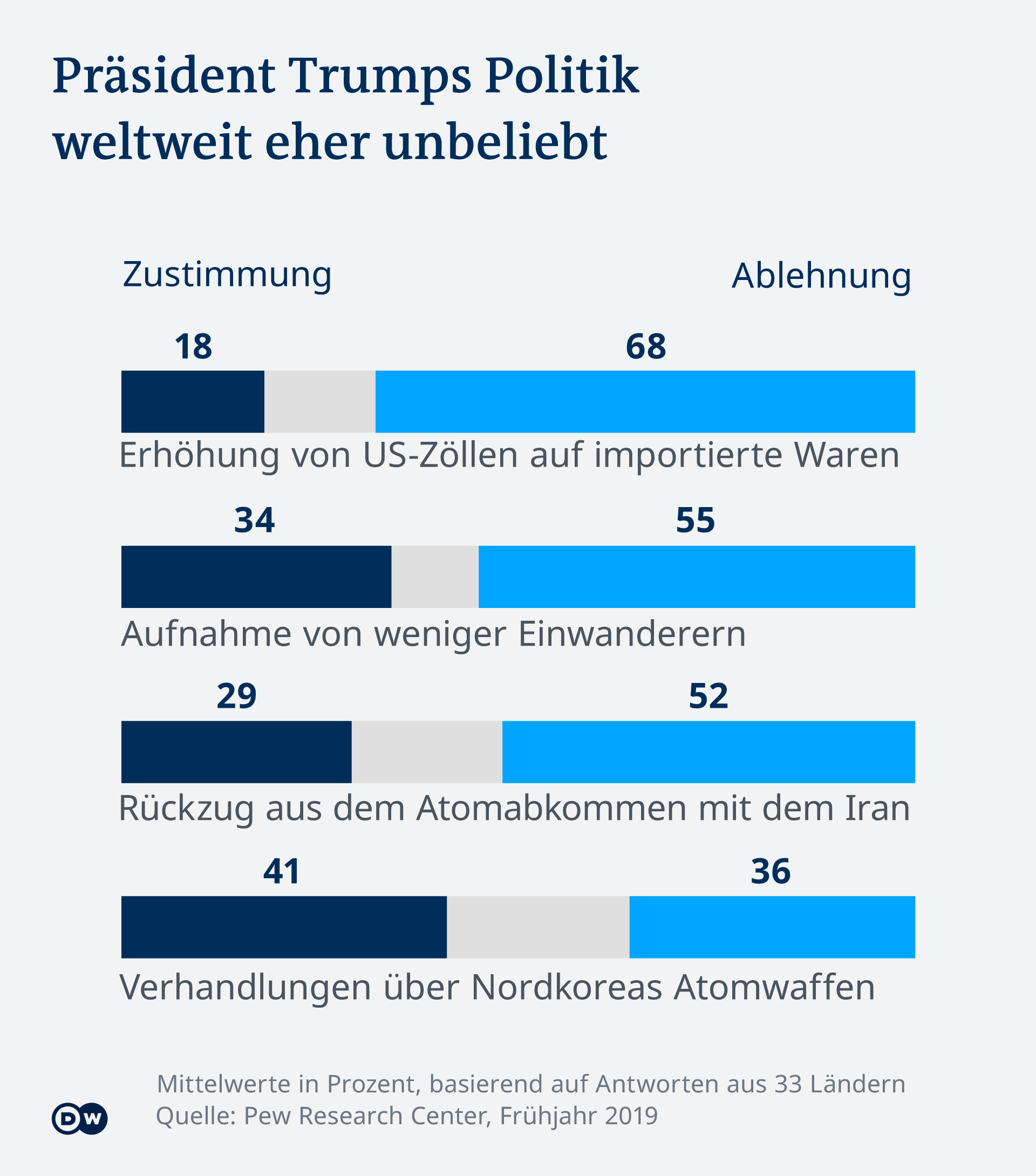 On the other hand, Washington’s advance in the relationship between the US and North Korea is well received. Trump was the first president to meet with a North Korean ruler. He met several times with Kim Jong Un to negotiate North Korea's nuclear weapons program. 41 percent of the people surveyed around the world see this as positive, 36 percent reject the negotiations.

Against the background of current events, it is particularly interesting to see how negatively a majority of those questioned see the US withdrawal from the nuclear deal with Iran. In the worsening conflict with Iran, President Trump repeatedly emphasized how bad the agreement was for the US and that it gave Iran too many freedoms. But 52 percent of respondents worldwide see the US exit in 2018 as a bad decision.

With a few exceptions, President Trump's image is not in particularly good shape in the world. But the people who were interviewed for the study in every corner of the world make a distinction between the President and their view of the United States. 54 percent of them have a positive image of the USA. "The current president is a big factor when it comes to the US image, but not the only one," says Poushter. "Things like economic power, pop culture and respect for human rights are also important for the country's image."